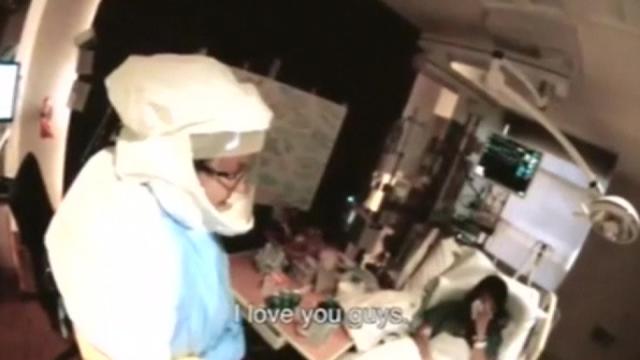 The idea has been creeping up into my consciousness over the last few days. The stark images of the health care worker in full HazMat gear tending to Nina Pham, handing her a tissue to dry her crying eyes. Every tear infected with Ebola. The incessant images of looped video from Africa with very brave doctors and nurses tending to very sick men, women and children.

The hazmat suit is an allegory. It’s significance: full protection from deadly pathogens. Hazmat suits are also used in nuclear facilities where there’s been a breach. Protection against the most severe forms of toxic or radioactive chemicals.

I caught part of an interview with an astronaut who’d been in space for two years. He had a lot of physical problems upon his return to earth. His heart hadn’t need to push against Earth’s gravity and he had pretty severe circulation problems, couldn’t walk for weeks, and to learn to run again without balloon his veins and arteries, he need a full blown rehabilitation for many months.

His body adapted to the environment of weightlessness in space, now his body needed to adapt Earth’s gravitational force. One question to the astronaut: Did your time in space give you any sense of the spiritual? His answer: We discussed faith, God and spiritual things every day in space. When you are paternalistically above the earth, disconnected from the planet and its seven billion inhabitants, it gives you a very different perspective. When you see the Earth from space, you see it for what it is: a jewel with abundant forms of life of nearly infinite variety. There’s nothing like it at least in our own solar system. (paraphrased)

So Earth is a jewel and we hold on our planet abundant resources, life giving and life sustaining. It’s a friendly planet much of the time. Most of the time, but it has its perils. Let’s be amazed at what we have here and take precautions for what we know to be dangerous and life threatening.

My youngest daughter, Christina and I attended her first Driver’s Ed class yesterday. The statistics are enormous. Teenagers die at very high rates in automobiles. It’s imperative that passengers as well as the driver learn and practice safe habits. No loud music, wear the seat belt 100% of the time.

We know how to treat the flu, yet 10,000 Americans will die from the flu this flu season. Most people will recover. Many people will be exposed, not everyone will contract illness from the flu virus.

Ebola has claimed one death in America so far with two others in jeoprady. In Africa, the death rate is 70%, which means the survival rate is only 30%. It’s a bad, bad virus.

How do those 30% survive? 1. They stay hydrated and have some sort of care. 2. Their immune systems are strong enough to fight the virus.

That is the amazing thing. Right now, we are in a death struggle. It’s happening inside our bodies constantly. The Natural Killer cells of the immune system are attacking the pathogens that invade our bodies, through what we breathe, what we ingest. We survive because our very complex organisms are able to stave off illness, infection, pathogens, viruses.

Some “smart” or “devious” marketer took Vitamin C and put a label on the bottle and called it Ebola-C. A high dose of Vitamin C. He’s sold half a million dollars worth of product at $39 a bottle. Some would say this is a con and that person or company is playing on the hype surrounding ebola. Granted.

But the idea is not entirely without merit. Last week I sent two emails basically saying the same thing: boost, strengthen your immune system. It’s not just ebola, but there’s the enterovirus, the flu, staph infections, MRSA, not to mention 100,000 deaths in the USA from prescription drugs, 600,000 deaths a year from heart disease, 400,000 a year from cancers.

What’s the common denominator? Do the best you can with what you have. I am going to remind you of my formula for health and wellness.

Mind State: Have a positive, grateful attitude for all the good things you have. All the benefits that come your way.

Exercise: I’ve come to learn this past summer how important exercise is. It’s actually affects mind state, brain chemicals and truly is the ultimate stress buster.

Diet: You are what you eat. Eat clean and wholesome food.

Sleep: The 6-8 hours of downtime you must take each and every day is absolutely imperative to regeneration and healing.

The acronym is MEDS.

Here’s my “Ebola” package: I am not making claims like the other guy that it’s going to give you complete protection but let’s just call it your “inner hazmat suit.” Of course this is simply based on common sense naturopathic values. There is no cure here. This is prevention and precaution and no claims are made as to how your body will react to invading virus or pathogens. One client I spoke with recently had been on Epicor, lapsed for a few months and caught a whopper of a cold. She’s back on Epicor now. Let’s stay healthy.

Advance Probiotics – to help with your gut health *80% of your immune system resides in your gut.

—-Get this package on Monthly Auto Ship for $33 with shipping included.

—-Get the 3 month package delivered every 3 months for $93 with free shipping.